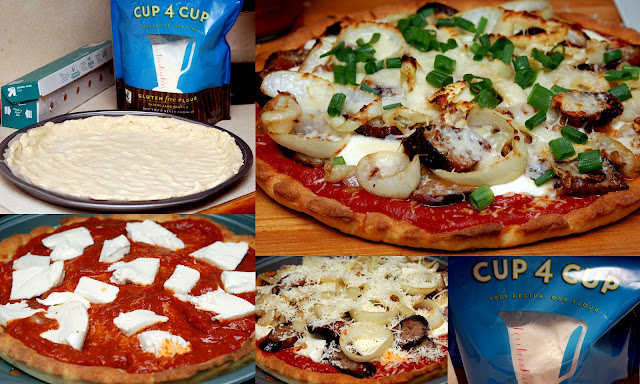 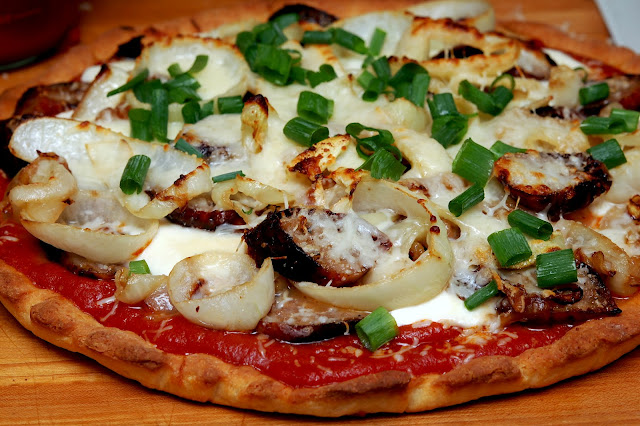 2. Add the 3 tablespoons of olive oil and the water in a stream until a ball begins to form.

3. Place the ball of dough in a bowl that has been drizzled with olive oil. Turn the dough to coat it. Cover the bowl with plastic wrap and let rise 1 hour in a warm place.

4. After the dough has risen, press into a disk and park in the fridge until ready to use-at least 45-minutes.

5. Press dough into a parchment lined pizza pan. I used one with holes on the bottom for extra crispness! Build up the sides for the crust and thin out the center. Use a fork to make tiny holes on bottom and rub olive oil all over the crust. Bake in a 425 degree preheated oven in the pan for 10 minutes on a baking stone. Remove from the pan placing the pizza directly on the stone for 5 more minutes. Remove from the oven. Add sauce (recipe below), fresh mozzarella, sauteed sausage /onions (recipe below) and some grated cheese-I used a 6 cheese mix. Return to the oven for about 10 minutes until the cheese is all melted. Top with scallions!
crust recipe adapted from bon appetit

PLACE ALL IN A LARGE POT AND BRING UP TO A SIMMER. COOK COVERED 45-60 MINS BEING SURE TO BREAK UP THE LARGE TOMATOES IF USING THEM. I ADDED SALT, TOO!!!! DISCARD ONION WHEN DONE COOKING.

MAKE THE SAUSAGE/ONIONS
Cook 1 pack of sausage in the oven at 350 for 1 hour, turning once. Remove and slice thinly. Heat evoo in a pan and add 2 sliced onions ad the sausage..sautee till well blended. Set aside to cool for pizza.

Any cookies that may not be particularly necessary for the website to function and is used specifically to collect user personal data via analytics, ads, other embedded contents are termed as non-necessary cookies. It is mandatory to procure user consent prior to running these cookies on your website.